Since May 2019 Microsoft offer as a part of Azure DevOps service Multi-Stage YAML pipelines. Probably you will ask what is a difference between standard approach of CICD process and Multi-Stage? Answer is pretty simple - in standard approach only CI (build) part of CICD process was possible to define as YAML definition. Multi-Stage YAML pipelines (name of it is bacially self explanatory) approach allows to define both CI (build) and CD(release) processes in YAML language.

Ok, but why I should use it if I can easly click everything in portal?

Of course you can do everything via GUI, but common why not take one step forward and define your pipeline as a code? How cool it can be if you are defining not only infrastructure as a code but also your whole CICD process?

If I didn't encourage you yet to using this funcionality, below you can find more advantages of using it:

Sounds good, but what if I don't have experience with YAML language?

If you think it is problem you are totally wrong. YAML is not complicated - if you ever define Azure resource definition using Azure Resource Manager (ARM template) you will for sure be able to easily write YAML pipelines.

How to get started with Multi-Stage YAML pipelines?

Let me guide you step by step how to configure such pipeline.

In my example I will show you how to configure Azure Kubernetes Service with some additional tools which are usefull during application deployment.

Later you can adjust it to your needs by changing specific task - however overall process of creation will be basically the same.

In my scenario I will shouw you how to setup additional tools on Azure Kubernetes Service cluster. Following prerequisites should be met:

In first step we need to define environment in Azure Dev Ops for each cluster. Go to Pipeline->Environment->Create Environment Type the name of the environment, provide description and choose Kubernetes as a resource and click Next. 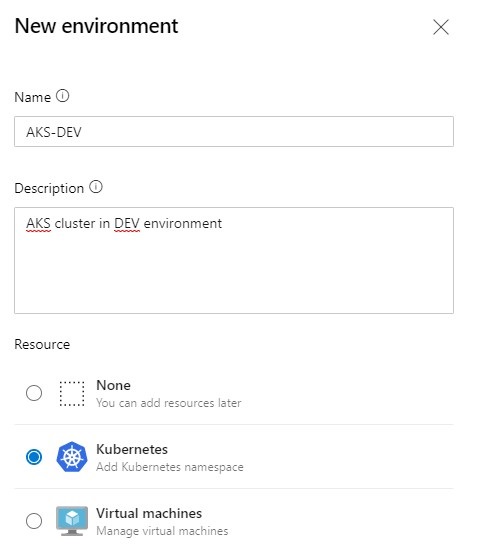 In next window choose subscription and AKS cluster which you want to add for specific environment. Define also namespace which should be used and click validate and create. 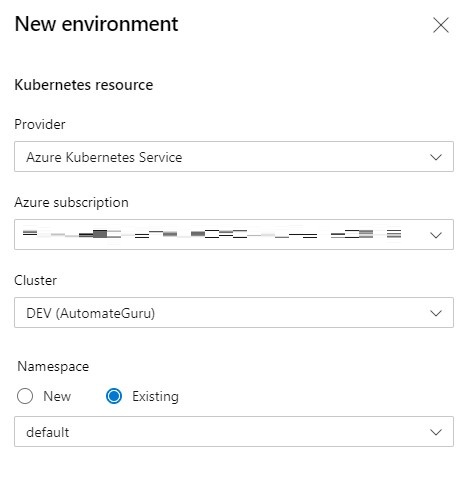 Once it's done you should see AKS cluster added to environment. Repeat above steps if you want to add additional AKS clusters.

You should also configure variable group which should look like on below picture. Of course values for environments and service connections should be adjusted to your configuration. 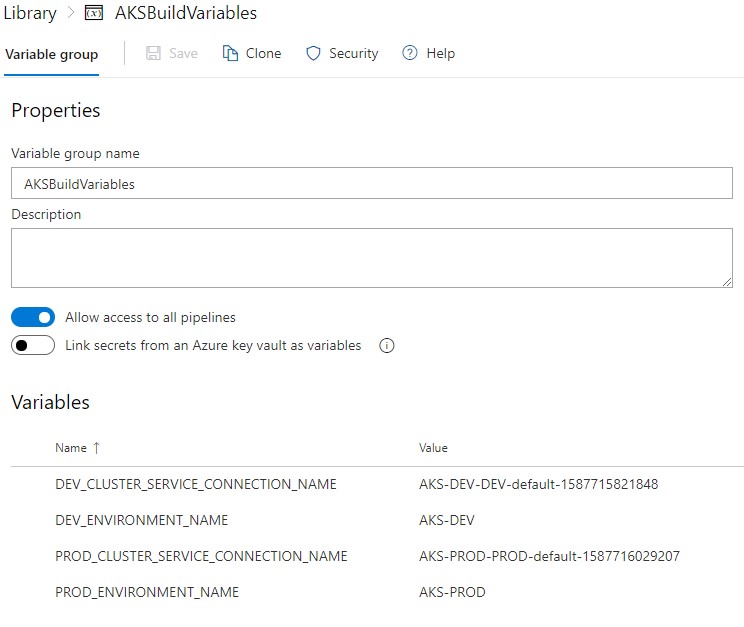 Once we have environment configured we can start with configuration of YAML files.

As a first step we should define build pipeline azure-pipelines.yaml. In our scenario it will be quite easy and yaml will look like this:

As a variables we are using variable group defined in prerequisites step. It will be used for gathering all sensitive data in encrypted way.

The main thing we will do here is publish all files as artifacts of this build.

At the end of above yaml there is template deploy-to-all-stages.yaml which will be used for caling specific stages.

As you can see here we are specifing configuration for each stage. We can use different deployment template depends on scenario we want to implement.

Once you have file with stages defined, it's time to create main deployment template. In our case it will be called deployment-stage.yaml.

Next we are defining vm image on which deployment will take place and main configuration is done.

In deploy section we provide tasks which should be used in our release.

For third and last task we need additional yaml file to be added to our GIT reposiotry.

Ok, once we have everything prepared your GIT repo should looks like on below picture.

As a result you should see that Multi-Stage YAML pipeline apply changes to all your clusters.

In my example I shared with you scenario for AKS cluster configuration.

Similar scenarios for deployment with ARM template usage can be done similar way without going deep dive into envrionments part.

Just wanted to show you how awesome are multi-stage YAML pipelines, hope that I ecourage you to use them ;)